2017 is almost upon us, so here’s the preliminary before it happens.

I’m setting myself a challenge.

I will spend no more than ten pounds a week on food.

My food store cupboard is full of stuff. Like, really full. I have lentils, split peas, flour, potatoes, pasta, cans and onions and all kinds of stuff that I sort of use but not really.

I’m not really good at these about-nothing posts. See y’all in a week.

I’ll add pictures and proper text to this later. On my way out…

Mix all the dry stuff except the bicarb and cream of tartar.

Add the wet and mashed stuff. Mix that in.

Add the bicarb and tartar, and stir until “just mixed”.

Pour into a rectangular baking tray (I line mine with greased foil usually because then I can just lift the whole thing out and peel off the foil) and bake! (For about half an hour on about 180C, checking occasionally).

I had a fairly epic session at the gym today, so I thought I’d make something ridiculously calorific to compensate. Actually, this is so rich and I got so carried away that I ended up making enough for two people.

Chop and fry your onions and mushrooms with the powder fort. When lightly sizzled, add the lentils and poppy seeds and soya chunks and fry together.

Mix the wine and vinegar with the bouillon powder (powder first, a little liquid at a time) and then chuck it all into the pan and allow to simmer.

Add the chestnuts, dates and almonds and allow to cook for about ten minutes on a low heat, adding a little water if it dries out completely. When your soya chunks are soft enough to eat, it’s done.

Remove from the heat and stir through the fresh parsley. Serve immediately.

Apart from the obvious use of mockmeats containing peanuts and soya… this is feasibly a fairly authentic dish.

Chop the onion, dates, protose and sausage, and fry in the oil with the powder fort.

Add a tablespoon or two of the cooking sherry, and a little water. You don’t want things swimming in water, just kept moist.

Allow to cook for a few minutes. One everything was in the pan, I started cooking my kale and it was all ready at the same time. Very quick. 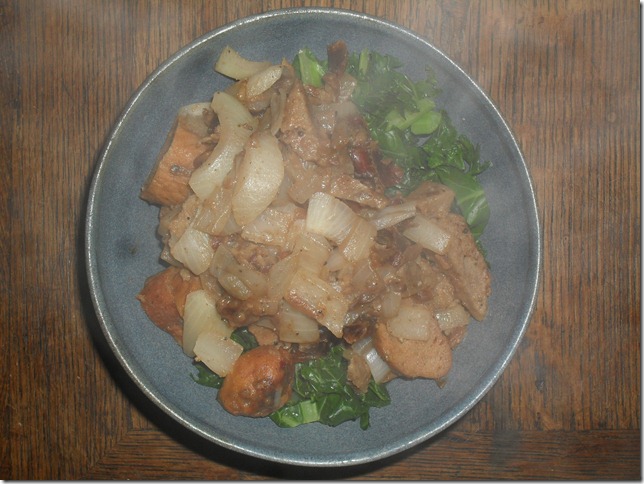 Lots of Medieval recipes call for a spice blend called powder fort. This seems to have been a “house blend”, and so varied enormously. This is my interpretation.

I have swapped out some harder to find ingredients with related species or similar tasting ones (which seemed pretty reasonable).

Flavour-wise, it’s kind of Christmas-meets-Moroccan? Very good, whatever it is. 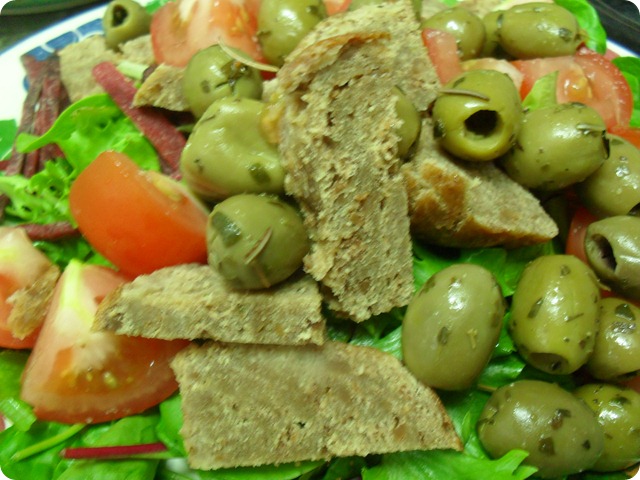 One of my hobbies (if you can call it that) is looking at, and veganising, recipes from other times, languages, culinary traditions etc. Protose was a meat alternative based on peanuts and gluten that was originally invented by Kellogg’s, I believe, in around 1900, and produced up until the year 2000. Sadly, I gather it never had much success.

However, I’ve decided to recreate it. Or emulate it, perhaps. Lets say I’m a food revivalist? That sounds okay. In any case, I’m planning on putting up a load of sort of Medieval recipe over the next week or so. Lots of early recipes are incredibly imprecise regarding quantities and cooking times and temperatures (in the days before gas and electricity and thermometers, one could not simply put the oven on 180C and then go and watch Bones, after all) but this is fine because I only measure things under duress and generally just chuck things together using common sense. Unless I put them on the internet, in which case they’re only slightly imprecise.

ANYWAY, here is the recipe for my crack at protose.

I use unsweetened, unsalted crunchy peanut butter. If you use sweetened or added-salt peanut butter, omit the salt and sugar, obviously.

Mix the dry ingredients evenly and then add the peanut butter. Rub it between your fingertips until it has a breadcrumb-like consistency. Pour in a little stock, and knead it together to form a dough ball. Taste a little. Isn’t it delicious?

Put in a small oven-safe dish with a lid that fits well and pour over a little more of the stock. You’re going to be half-baking, half-steaming this, so it needs to stay moist. It’s a very, very good idea to oil your dish, as gluten sticks to anything and everything.

Put in the oven at about 180 degree/whatever you cook things on normally. Remember: to be imprecise is to be authentic. Ahem. Remove from the oven after about an hour and allow to cool.

Really tupping good. Kind of like if beef and peanuts had a baby. A thousand noms to protose.

You can make this with hand-made seitan as well (from strong flour, I mean). 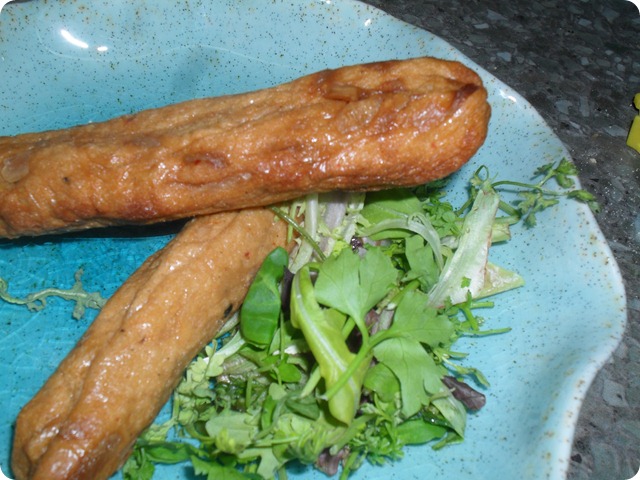 Mix all the dry ingredients and the oil.

Add the stock a smallish amount at a time. You want a firm dough.

Knead it for a minute or so, then let it sit for about half an hour. Lots of gluteny sausage recipes seem to skip the letting it sit stage, but I think it drastically improves the texture.

Knead it a little bit more, then roll into sausage shapes and wrap in oiled foil (seriously, oil your foil and you’ll save yourself a whole lot of hassle. You don’t need much; I usually put a drop on one sheet and then rub another sheet on that, then another on that etc until they are all covered lightly). I got twelve out of this amount comfortably.

Steam, or bake with a dish of water in the bottom of the oven, for about half an hour. They firm up a bit when cooled, and soften a bit when heated again.

As vegetables go, I think the British treat kale an inferior cousin of spinach. It does have something that cooked spinach does not: texture. While spinach wilts languidly, kale stands up like a boss. Also, it is a pretty good source of iron and also contains calcium (as does sesame and the calcium-set tofu I’m using). 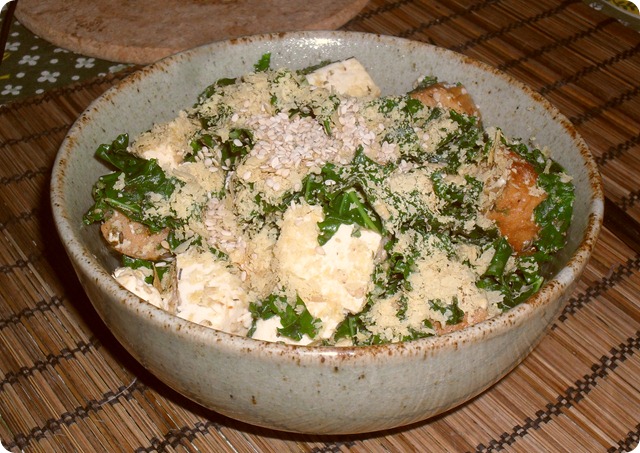 Steam the kale. It should take about 5 minutes.

Cube the tofu and slice the sausage into chunks and mix with a little chilli sauce and 2 teaspoons of sesame seeds. Fry it all in a little oil.

When the kale is cooked, add it to the frying pan or wok and stir it all through and add whatever herbs suit your tastes.

Whack it in a bowl, top with nutritional yeast and the last teaspoon of sesame.

I recently went a bit mad and bought 7 packs of tofu. It was so cheap! Hence, there will probably be a lot of tofu recipes going on. It’s almost like I was living up to the vegan stereotype or something.

You’re going to make two marinades for this one. Well, the mushroom one is just mushrooms with chilli sauce and 1 teaspoon of linseed over the top. Mix it up. Ta-dah!

For the tofu: gently squeeze the tofu to remove any excess moisture, and then cut into cubes about a thumbnail across. In a cup, mix the miso, onion powder, linseed, sesame, soy sauce and vinegar, then gently mix it through the tofu and allow to sit for an hour or so.

Put both the mushrooms and the marinated tofu under the grill (broiler? I think that’s what Americans and other aliens call it) for about five or ten minutes, until heated through.

Serve with a little salad and a little mayo, if you’re feeling decadent.

Lentils are a good source of protein and take only a few moments to prepare. Gluten free, depending on seasoning (replace the soy sauce).

Cook the lentils in just enough water to cover them. When cooked, remove from heat but do not drain. Dice the onion and garlic and grind the pepper.

When the lentils are hand-cool, pour them with any remaining water into a mixing bowl and add the remaining ingredients. Mix together to form a thick paste.

Allow to sit for 15 minutes. Form the paste into four rough patties and fry on a griddle pan on a medium heat for ten minutes, turning regularly. Serve with a light carrot and celery salad, with a lashing of chilli sauce if desired.